In the eternal quest to find solutions that slow, prevent or reverse the aging process, the scientific community often treds where no one has gone before. The leading-edge is deeply immersed in the world of stem cells, which is not surprising given that stem-cell research specializes in treatments that can help restore what nature took away.

The term “stem cell” was proposed in 1908 by Russian histologist Alexander Maksimov for scientific usage. The first successful use of stem-cell restoration happened in 1968 when a bone marrow transplant was performed in Minnesota on two siblings who each suffered from severe immunodeficiency.

Ten years later, in 1978, stem cells were discovered in human cord blood. In 1981 came another breakthrough, the first in-vitro stem cell line created from mice. It took an additional 14 years to derive the first embryonic stem cell from a primate, a rhesus monkey, in 1995.

That was followed in 1997 by the first stem-cell cloning of a sheep. The lamb, called Dolly, was the first mammal cloned from an adult cell, using a process called somatic cell nuclear transfer. This process involves transferring a cell nucleus from an adult cell to an unfertilized, developing egg cell that had its nucleus removed. Dolly was cloned by Ian Wilmut, Keith Campbell and colleagues at the Roslin Institute, part of the University of Edinburgh, Scotland. 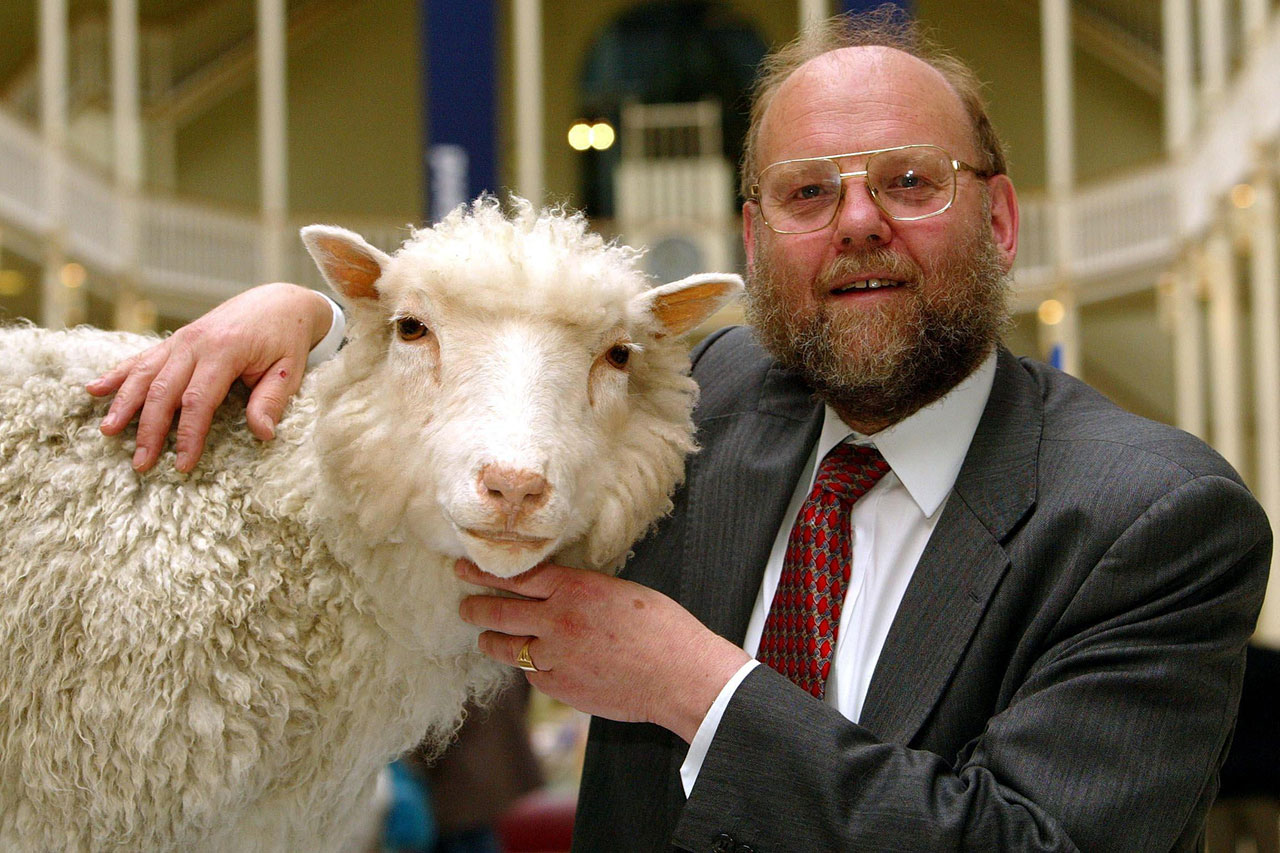 First stem-cell cloned mammal, Dolly the Sheep and Professor Ian Wilmut of Roslin Institute, part of the University of Edinburgh, Scotland team that created the world’s first mammal cloned from an adult cell. Wilmut believes stem-cell research might still lag 20 years behind if Dolly the Sheep had never been born in 1997.

In 1998, James Thomson and co-workers at University of Wisconsin–Madison isolated cells from the inner cell mass of early embryos and derived the first human embryonic stem-cell lines. A few years later, in 1999 and 2000, scientists discovered that bone marrow cells could produce nerve or liver cells, and that brain cells could also yield other cell types.

When President George W. Bush issued an executive order banning federal funding for new sources of stem cells developed from preimplantation human embryos in 2001, his short-sighted action froze U.S. stem-cell research and discouraged scientists. Despite Bush’s action, the field of stem-cell research has made quantum leaps in the past two decades, exciting the global scientific community.

In 2006, a Kyoto University stem-cell researcher, Shinya Yamanaka, and a graduate student, Kazutoshi Takahashi, revived the field by creating a way to induce any adult cell, such as a skin cell, to revert to its earliest “pluripotent” stage — an iPS cell. iPS stands for induced pluripotent stem cells. In the pluripotent stage, a cell has the ability to generate all cell types that make up the human body. Embryonic stem cells are considered pluripotent. These cells can become any type of cell, from a heart muscle cell to a neuron. The process of maturing stem cells from a pluripotent state to an adult tissue type is called differentiation.

Yamanaka cites a great example of the use of stem cells in disease management. At the Riken Center for Developmental Biology, Dr. Masayo Takahashi and her colleagues used iPS cells to treat macular degeneration in a 70-year-old patient, deriving adult retinal cells from skin cells and transplanting these iPS cells into the patient’s eye to restore her vision.

As of January 2016, 10 stem-cell therapies have been approved globally, including Parkinson’s, retinal and corneal diseases, heart and liver failure, diabetes, spinal cord injury, joint disorders and some blood disorders.

Currently, the only widely used stem-cell-based therapy is bone marrow transplantation. Blood-forming stem cells in the bone marrow were the first stem cells to be identified and have helped thousands worldwide suffering from such blood cancers as leukemia.

That pioneering treatment dates back to 2005 when stem-cell researchers at the University of Minnesota were able for the first time to coax human embryonic stem cells to create cancer-killing cells in the laboratory, paving the way for future treatments for various types of cancers or tumors.

The seductiveness of innovative stem-cell therapies has propelled a new type of business: “stem-cell tourism“. Many overseas clinics advertise miraculous stem-cell therapies for a wide range of incurable diseases that have not been tested for safety or even for effectiveness. International, and even domestic, clinics are offering up unproven and untested stem-cell treatments that, in some instances, has led to the death of patients.

Still, some notable case studies have surfaced that underscore the vast potential of stem-cell therapy. Take the case of New York Yankees pitcher Bartolo Colon. In the summer of 2011, Colon was enjoying his best season since 2005, his last full season. At 3.10, his ERA was among the best in the league. On May 30, six days after his 39th birthday, he pitched his first shutout in five years, hurling his final pitch at 95 mph. Keep in mind that was after he sat out the 2010 season to rest his aging and injured right arm.

Here’s a guy who was not getting any better. All of a sudden, you do this [stem cell] procedure and a few weeks later he’s dramatically better.”— Joseph Purita
The Institute of Regenerative Medicine

What was the secret behind Colon’s remarkable comeback? According to Joseph Purita, founder of The Institute of Regenerative Medicine in Boca Raton, Fla., it was an infusion of stem cells, which Colon received in the Dominican Republic before the 2011 baseball season began.

As Purita tells USA Today in a June 29, 2011 article written by Steve Sternberg and entitled, “Doctors offer unapproved stem cell therapies” (link removed), “Here’s a guy who was fooling around for two years and not getting any better. All of a sudden, you do this procedure and a few weeks later he’s dramatically better. There must be something going on here.”

In June 2016, Dr. Gary Steinberg, professor and chair of neurology at Stanford University School of Medicine in Palo Alto, Calif., released the results of a stem cell study involving 18 individuals with an average age of 61, who had motor function disabilities as a result of a stroke suffered six months to three years before. Some patients were unable to move their arm, while others were unable to walk.

A hole was drilled in the skull of each patient and SB623 cells injected in the stroke-damaged areas of the brain. SB623 cells are mesenchymal stem cells (MSCs) — multipotent stromal cells that can differentiate into a variety of cell types. MSCs were taken from the bone marrow of two donors and induced to boost brain function.

Within a month of the procedure, Steinberg’s team noticed that the patients started to show signs of recovery, and their improvements continued over several months, lasting for more than two years in some patients. As Steinberg notes, “This wasn’t just, ‘They couldn’t move their thumb, and now they can.’ Patients who were in wheelchairs are walking now.”

Advances in stem cell therapy have given rise to a new type of healthcare discipline, called “regenerative medicine,” which is catering to an avant garde of athletes and intrepid sufferers. Therapies available treat all bodily zones prone to frequent breakdown: joints, like knees, shoulders and arms, plus that perennial health challenge, the back.

Early results like the ones described above point to the future promise for this young science and hold out hope for next-generation therapies that will fight age-related diseases, including macular degeneration, joint disorders like rheumatoid arthritis and heart disease.

But as Yamanaka cautions, “iPS cells are only 10 years old. The research takes time. That’s what everybody needs to understand.”