Liposuction, also called lipoplasty or suction lipectomy or suction-assisted liposuction or just lipo, is a fat-removal procedure used in plastic surgery. In general, fat is removed via a cannula, a hollow stainless steel tube, which is inserted under the surface of the skin. A powerful, high-pressure suction device, called an aspirator, then breaks up and “sucks” fat, called adipose tissue, from the body.

Liposuction slims and reshapes specific body areas and improves your body contours and proportion, by eliminating any undesirable deposits of body fat that have been resistant to diet and exercise. It helps sculpt the body, which is why the technique is also referred to as “liposculpture.”

People who undergo liposuction usually have stable body weight and should be within 20 pounds of their ideal weight. Liposuction is not an overall weight-loss method and it’s not a treatment for obesity. The procedure also does not remove cellulite, dimples, or stretch marks.

The concept of liposuction was first pursued by Dr. Charles Dujarier, a fully qualified French surgeon. In February 1926, Dujarier operated on a young model and ballerina, Mademoiselle Geoffre, who wished to improve the looks of her unbecoming ankles and knees.

To remove her subcutaneous fat, or “adipose tissue,” Dujarrier made a long skin incision and broad subcutaneous dissection, and removed a large part of skin and adipose tissue with a uterine curette, a spoon-shaped instrument.

The result was tragic. Due to excessive tissue removal and too-tight sutures, Dujarrier’s procedure caused necrosis (gangrene), which required the amputation of her leg. Geoffre successfully sued Dujarrier who was required to pay 200,000 francs, $200,000 in 1920s dollars or millions today. Shortly after his sentence was confirmed two years later, Dujarier died.

This surgical disaster set liposuction back 50 years because it wasn’t until 1975, when two Italian doctors, father and son team Arpad and Giorgio Fischer, developed the first blunt hollow cannula attached to a suction source. A cannula is a hollow stainless steel tube that is used to suck out the fat using a suction device, called an aspirator.

Liposuction is the second-most commonly performed cosmetic procedure in the U.S., after breast enhancement, including breast augmentation and breast lifts. According to the American Society of Plastic Surgeons, 211,067 liposuction procedures were performed in 2020, down 20% from the 265,209 procedures performed in 2019, the year preceding the pandemic.

Subcutaneous fat is the jiggly, pinchable fat located just underneath the skin. It’s harmless but aesthetically undesirable. The abdominal wall, made up of muscle and tissue, separates subcutaneous fat from visceral fat found inside the abdominal cavity. Visceral fat, typically associated with a beer belly, is firm and hard. People with a lot of visceral fat are sometimes called skinny-fat. Because visceral fat is stored next to your organs, it may impact your overall health.

All fat cells release hormones visceral fat, however, is more likely to interfere with organ functions, which can lead to greater insulin resistance (type 2 diabetes), higher blood pressure, higher bad cholesterol (LDL) levels in your bloodstream, and increased risk for heart disease and stroke. The moral of this story: exercise and diet to help reduce your visceral fat before and after liposuction.

Four different procedures can be used for liposuction. In addition to traditional liposuction, patients can consider the use of either laser-, ultrasound- or water jet-assisted liposuction:

Keep in mind that all the above procedures are all derived from traditional tumescent liposuction. The different approaches to improve the breakup or dissolution of body fat include heat (laser), mechanical agitation (ultrasound and water jet), or vibration (radio frequency).

Getting a liposuction procedure is already a stressful time. Then you have to deal with a practitioner, either a dermatologist, plastic surgeon, or medical doctor who dabbles in aesthetic procedures; and who tries to push you into a procedure they either like, own equipment for, or, heaven forbid, have some vested stake in, due to a manufacturer’s incentive or “spiff” that skews their judgment.

We will try to steer you in the direction of the best procedures here, including listing the top procedures based on our research, but keep in mind that some practices may own older versions of the equipment listed here, including problematic first-generation versions. It may be stressful, but better to ask your provider to be safe rather than sorry.

As mentioned before, liposuction is not a weight-loss remedy. It’s meant to body contour by removing stubborn fat pockets. Also, this is as good as any point to mention this one study, which suggests that liposuction is a very temporary solution. The study, entitled “ Short- and Long-Term Effects of Abdominal Lipectomy on Weight and Fat Mass in Females: a Systematic Review,” was published in July 2015 in Obesity Surgery, a trade publication.

The study is what’s known in the medical circles as a meta-analysis — a research study of other studies. The authors, all greek physicians, led by Konstantinos Seretis, affiliated with the Department of Plastic Surgery, Medical School, Aristotle University of Thessaloniki, Greece, systematically reviewed 10 studies of a total of 231 individuals. Their first observation was that “A significant weight loss and BMI improvement were reported in 4 out of 5 studies with a mean follow-up of 1–2 months, but in none of the 5 studies with a longer follow-up (3–20 months).”

The report continues, “This systematic review revealed only a transient effect of abdominal lipectomy in body fat and weight in women, which fades a few months after the operation. These results corroborate the evidence from experimental and clinical studies, which support fat redistribution and compensatory fat growth, as a result of feedback mechanisms, triggered by fat removal.”

In other words, the body adapts to the changes brought about by liposuction procedures and compensates by introducing new body fat.

You have to balance this study with the 8,528 RealSelf community member reviews that rate liposuction as “worth it” 88% of the time.

Also, an entire cottage industry of liposuction procedures worth more than $1.5 billion annually suggests that there may be more than meets the skeptical eye.

Our research shows that these are the top liposuction procedures today: 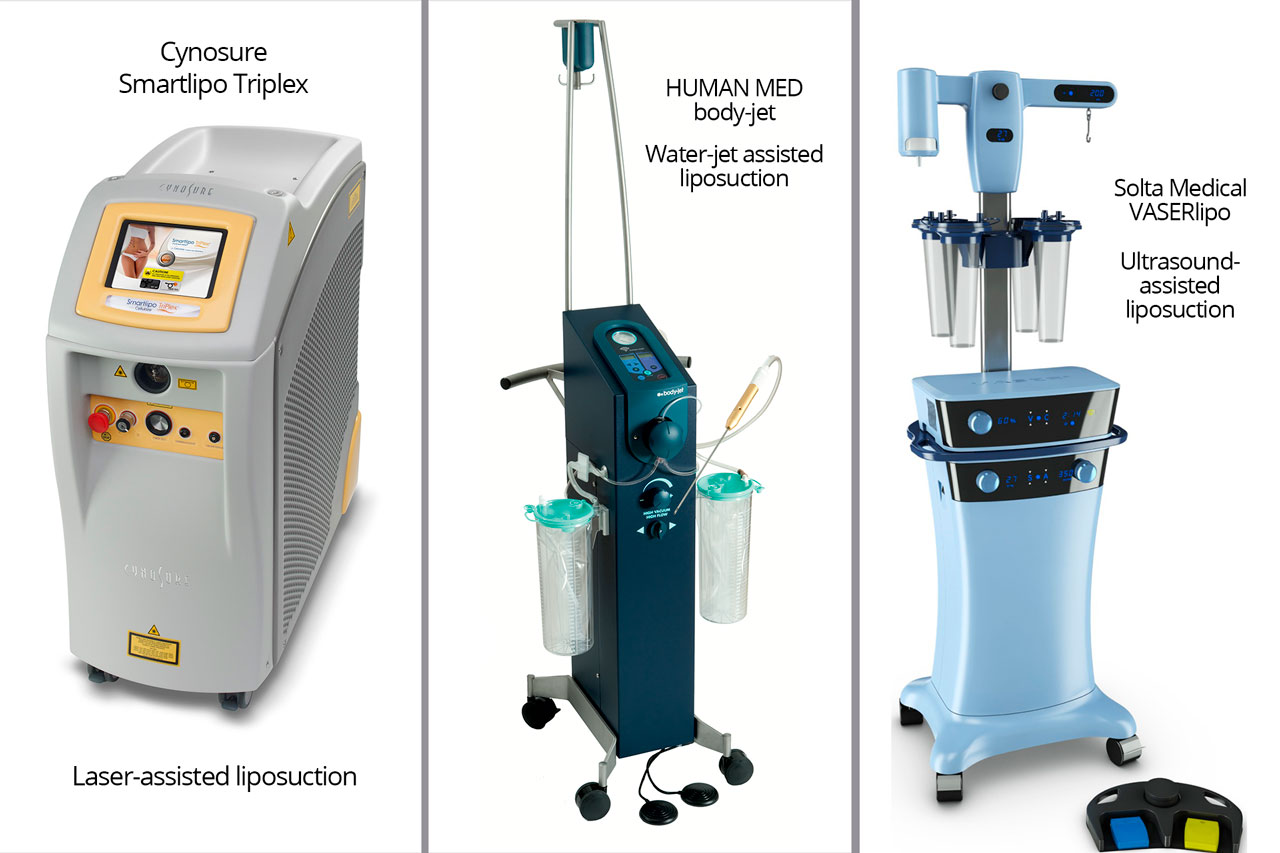 These are the most popular liposuction devices you will see in practioner’s offices. Keep in mind that some medical practices may own older versions of the equipment shown here, including problematic first-generation versions.