Last week we had a chance to test-drive the new Cadillac ATS, the company’s latest attempt to unseat the BMW 3-series and Mercedes C-class hegemony. There’s no question the Cadillac is a kick to drive but can it play in the major leagues?

The first thing we should acknowledge is that the ATS is not you grand pappy’s Caddy, that’s for sure. Our six-day road test took us from San Francisco to Santa Barbara and the surrounding wine region, including such scenic destinations as Paso Robles and Los Olivos. Our ATS feried us between such fine wineries as Denner, Laetitia, Lone Madrone, Stolpman and Tablas Creek.

Here are our strongest impressions by major feature category:

Engine
Our ATS was equipped with 3.6-liter V-6, delivering an impressive 321 horsepower. Flooring the gas pedal produced a notable growl as the ATS surged forward. And even with four people in the car, very dense highway merges were not a problem. The direct-injection V6 engine purred most of the time but was eager to push the ATS’ 3,461-pound (1,573 kg) frame in any direction.

Access
The remote features our preferred interface method, separate lock and unlock buttons, and trunk unlock plus a remote-start capability, which works from 195 feet (60 m) away — very convenient for getting the AC going in 106-degree Las Vegas weather. The remote also contains a hidden key, which can be used in an emergency. The engine uses a pushbutton start system.

Navigation
Here’s where we ran into our first problems. While the Cadillac CUE navigation system wakes up when your hand approaches the navigation screen, through an innovative haptic interface, keyboard entry on its touchscreen was hit and miss.

Quite often inputing destinations had to be laboriously corrected. Corrections frequently required repositioning the cursor, which was nearly impossible to do precisely. Apple’s iPad has set a very high standard for touchscreen controls and Cadillac will have to go back to the drawing board and significantly improve this feature — it’s too recalcitrant, nay belligerent, to be truly useful.

Bluetooth syncing with a mobile phone was effortless as was the Pandora system, once locked in on our test iPhone. The ATS also is available with a heads-up display but our ATS was not equipped with that feature, although it did occasionally light up a four-segment warning light that suggested something was terribly wrong but the driver information center did not explain why. 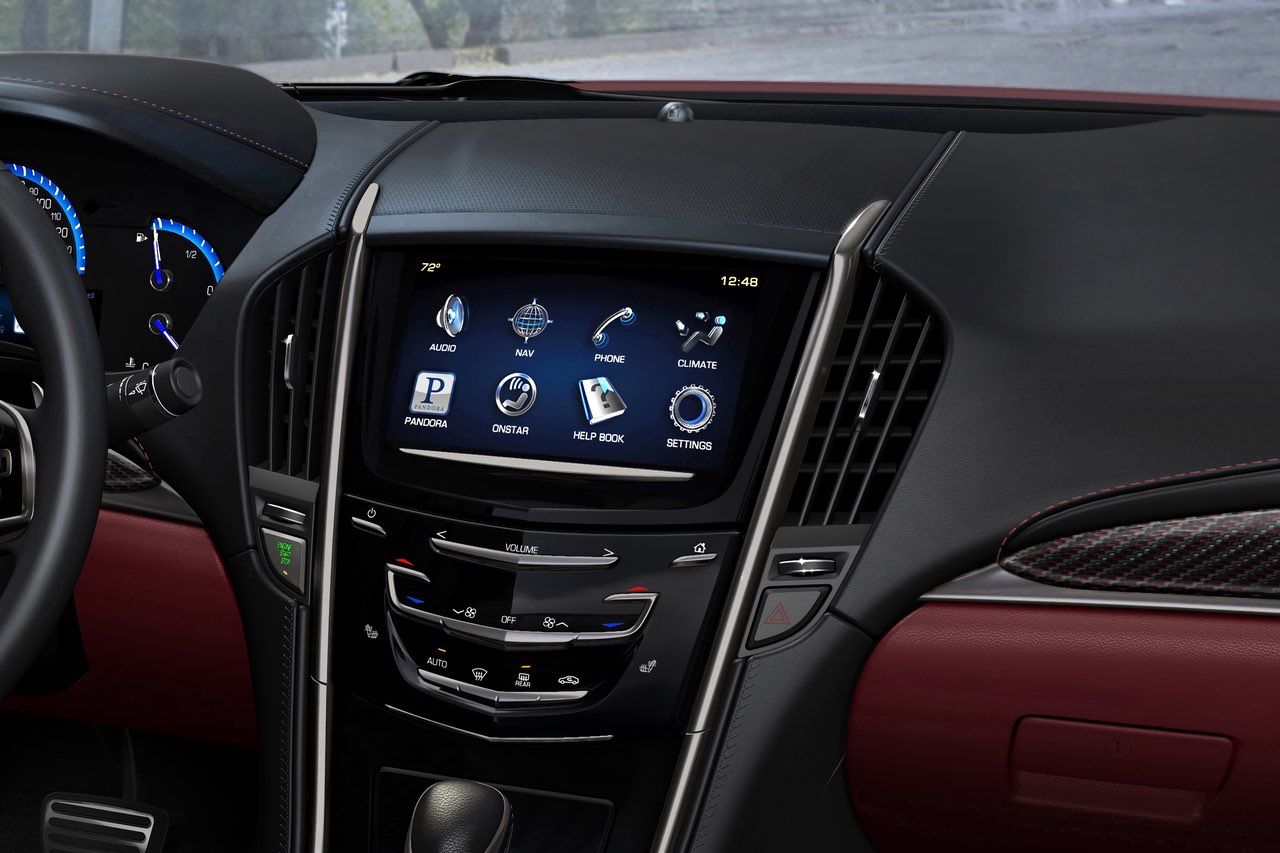 The Cadillac ATS features the optional CUE system, a touch-screen and voice-driven control panel that integrates with smartphones and tablets via Bluetooth, and offers a GPS navigation system with integrated Doppler weather reports plus Pandora Radio.

Audio
We liked how loud the 10-speaker Bose system could play but our feeling was that the quality of audio reproduction in a car can still stand improvement. The ATS’ audio system includes a SiriusXM satellite radio, a must have these days, plus HD radio. Unfortunately, operating the audio controls located under the navigation screen required using discrete buttons that did not always work as expected. The steering wheel volume buttons were easier to use.

Climate Control
The same idiosyncrasy applied to the buttons controlling the temperature for each zone. Much of the time, these discrete controls had a mind of their own about temperature settings and would end up selecting an unintended temperature. Since these buttons reacted slowly to the touch, we often found ourselves pressing too hard, causing wild temperature swings.

Steering Wheel Controls
On both sides of the steering wheel is a button that not only slides left and right but also toggles up and down. This took some getting used to as the toggle function was non-intuitive. The indicators were on the steering wheel itself and not on the buttons, causing one to press instead of toggling. Like the dashboard switches, the cruise control often had a mind of its own and would jump from, say, 65 MPH to 70, instead of by one mile as designed. The right-hand toggle was equally difficult to use. We had a very hard time resetting the trip odometer because the toggle switch refused to recognize a downward “select” press.

iDevice Integration
The ATS has two USB plugs, one hidden in a secret compartment under the navigation system and the other in the center console’s storage compartment. The front USB port was not very convenient because charging required closing the secret compartment’s lid, since driving with it open was annoying. And there was no way to figure out how to close the lid without forcing it down. Besides Bluetooth integration, the Cadillac ATS offers USB support for any MP3 player that complies with the USB Mass Storage Class specification (USB MSC), which lets you play your music via the control panel.

User Experience
Seating was comfortable for four adults on a long trip, which took us from San Francisco to Southern California, although our rear-seat companions were not tall. The driver’s seating position is outstanding, even for my 6-foot-2-inch (1.85 cm) height. The leather interior was nicely finished and outside visibility was outstanding. Cadillac did a good job on driver ergonomics, with easy-to-set power mirror controls, lumbar support, voice-assisted controls, etc.

The ATS doors close with a solid thunk, reminiscent of my Mercedes Benz and other luxury cars, proving that American workmanship can deliver a premium experience comparable to global competitors.

Another Cadillac innovation, the Cadillac Safety Alert Seat, which is able to tell a driver whether an object is nearby on the left or right by triggering a pulse on either side, was also not installed on our car, a major letdown. But our ATS did have a lane-departure warning system, which is great for people who like to nap while driving.

Our only other major quibble was fuel economy. While the car is supposed to get 28 mpg on the highway, the best we were able to manage with mostly highway driving was about 20.5 mpg.

Conclusion
Once Cadillac fixes its touchscreen and dashboard controls, we will highly recommend the Cadillac ATS. It’s a great car, particularly considering that the $48,785-sticker-priced model we drove is about $6,000 less expensive than comparable BMW and Mercedes-Benz cars. And if you like to buy American, you simply can’t go wrong with the ATS. It’s American automotive engineering at its finest.