You might be inclined to believe that after watching an episode of The Bachelor or any Housewives of… TV series that all women are enhancing their breasts. Nothing could be further from the truth. Only 193,073 breast augmentation procedures were reported in the U.S. in 2020, a decrease of 45% from 347,524 in 2007 when pre-recession pocketbooks were deeper.

That means that every year a city the size of Tallahassee proudly parades its new breasts in front of boob tube America. The actual breast augmentation figure is considerably higher due to poor survey response rates, as explained in our Facial Rejuvenation story. Medical tourism to Mexico and South America further impacts the total.

BBC News reported that 1.5 million women underwent the procedure worldwide in 2010. In the U.S., a combined total of 280,124 breast augmentation and breast lift procedures placed breast enhancement ahead of liposuction in 2020 as the most popular cosmetic surgical procedure.

There are three manufacturers that market breast implants in the U.S.:

This video aimed at Europe and Middle East markets, describes Mentor’s MemoryGel Xtra implants to a doctor audience but is useful for prospective implant patients as well.

The first breast augmentation occurred 60 years ago, when Timmie Jean Lindsey, a mother of six, received silicone implants at Jefferson Davis Hospital in Houston, Tex. in the spring of 1962. Ever since then, silicone has played a, pardon the pun, material role in the manufacture of breast implants.

Plastic surgeons Thomas Cronin and Frank Gerow used a supply of silicone donated by Dow Corning as source material. The original design of breast implants has undergone significant changes in the six decades since silicone was put to use. In the early 1980s, some women began complaining about breast pain and distorted breast shapes caused by their body’s reaction to implants. Implants cause connective tissue disorders called, “capsular contracture” and “calcification.”

Capsular contracture is the tightening of scar tissue that forms around a breast implant, which can lead to rupture. The scar tissue is considered normal and is known as the “capsule,” while “contracture” is the tightening. This is also frequently called the “hardening” of the breast due to implant surgery. Calcification, which presents as white-gray plaques on the inner surface of capsules, occurred in 100% of the 28 first-generation implants (1963-1972) analyzed, and 10% of 348 second-generation implants (1973-1987).

Unfortunately, the very advantage of second-generation implants, a thinner outer shell that resulted in far less calcification, also led to a rupture rate as high as 50% at 20 years.

In the late 1980s, thousands of plaintiffs prevailed against implant manufacturers, leading to a multi-billion dollar class settlement and the bankruptcy of Dow Corning in May 1995. The controversy resulted in intense scrutiny of safety and efficacy by the Food and Drug Administration (FDA) and a ban on silicone breast implants that lasted 14 years, from April 1992 until November 2006.

Despite the 1992 FDA ban on silicone breast implants, breast augmentation remained the third most common cosmetic operation in the U.S. in 1994 due to the substitution of saline breast implants.

The most significant innovation may well be the 2001 introduction of fifth-generation “cohesive” gel implants. These implants are unique due to the degree of “cross-linking.” Gel cohesiveness is determined by the amount of cross-linking with the silicone gel filler: the more cross-linking, the more cohesive the gel and the firmer it is. This helps it maintain its shape, according to Mentor.

The first thing you need to know when shopping for new breasts is the term “gummy bear implants” — a nickname for teardrop-shaped, cohesive gel-based implants. Cohesive gel implants are known to retain their shape better than other types of breast implants made from saline and earlier silicone types. The term has caught on so much that Natrelle even classifies its three implants as “Gummy, Gummier, and Gummiest.” 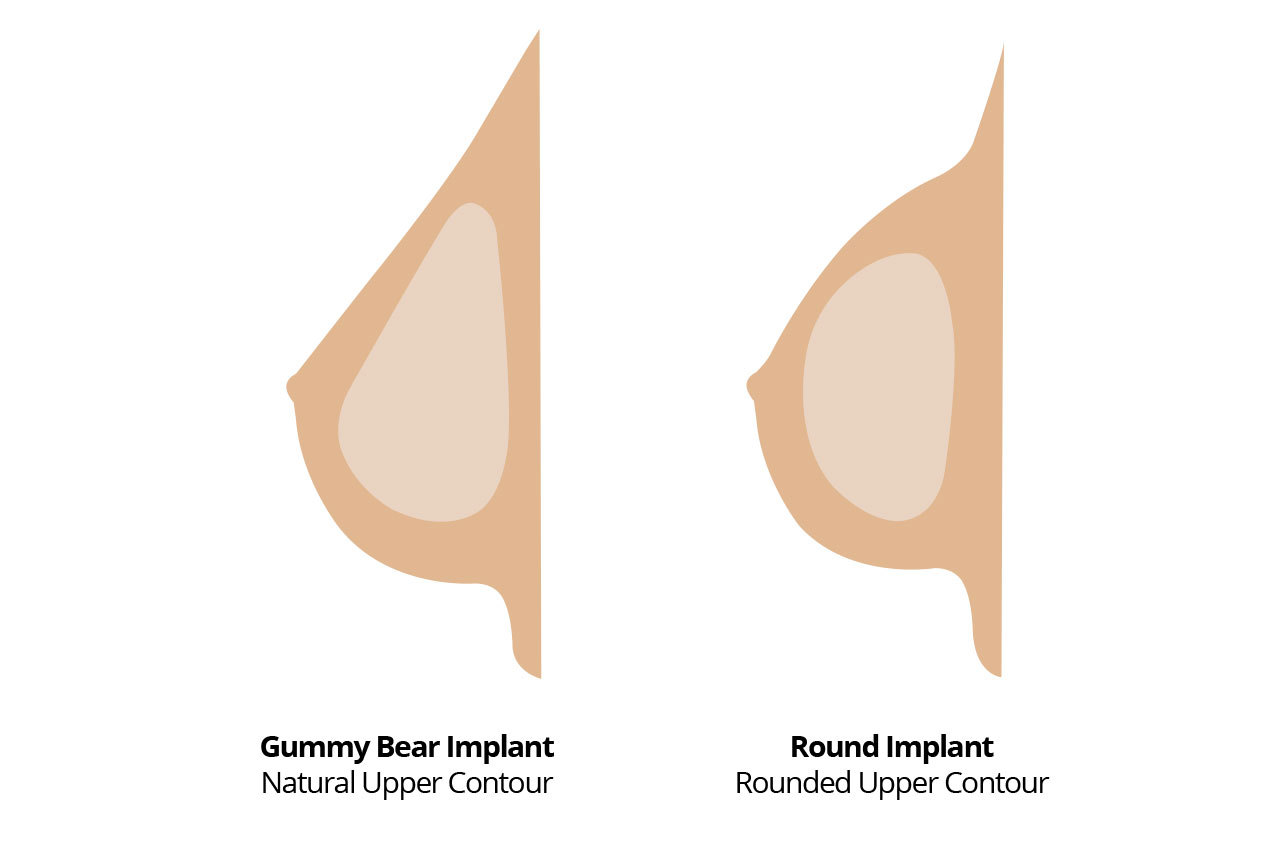 A tear-drop-shaped breast implant offers a more natural shape than a round implant, and due to the resemblance to gummy bears, its nickname has caught on.

Another concept to familiarize yourself with is profiles. The two basic implant shapes, gummy bear and round are available in varying degrees of projection, known as profiles. A breast implant profile refers to the level of forward projection from the chest. A high-profile breast implant will create a more prominent silhouette than either a moderate, called “Classic” in the image below, or moderate-plus breast implant of the same size, which is metrically expressed in cubic centimeters. 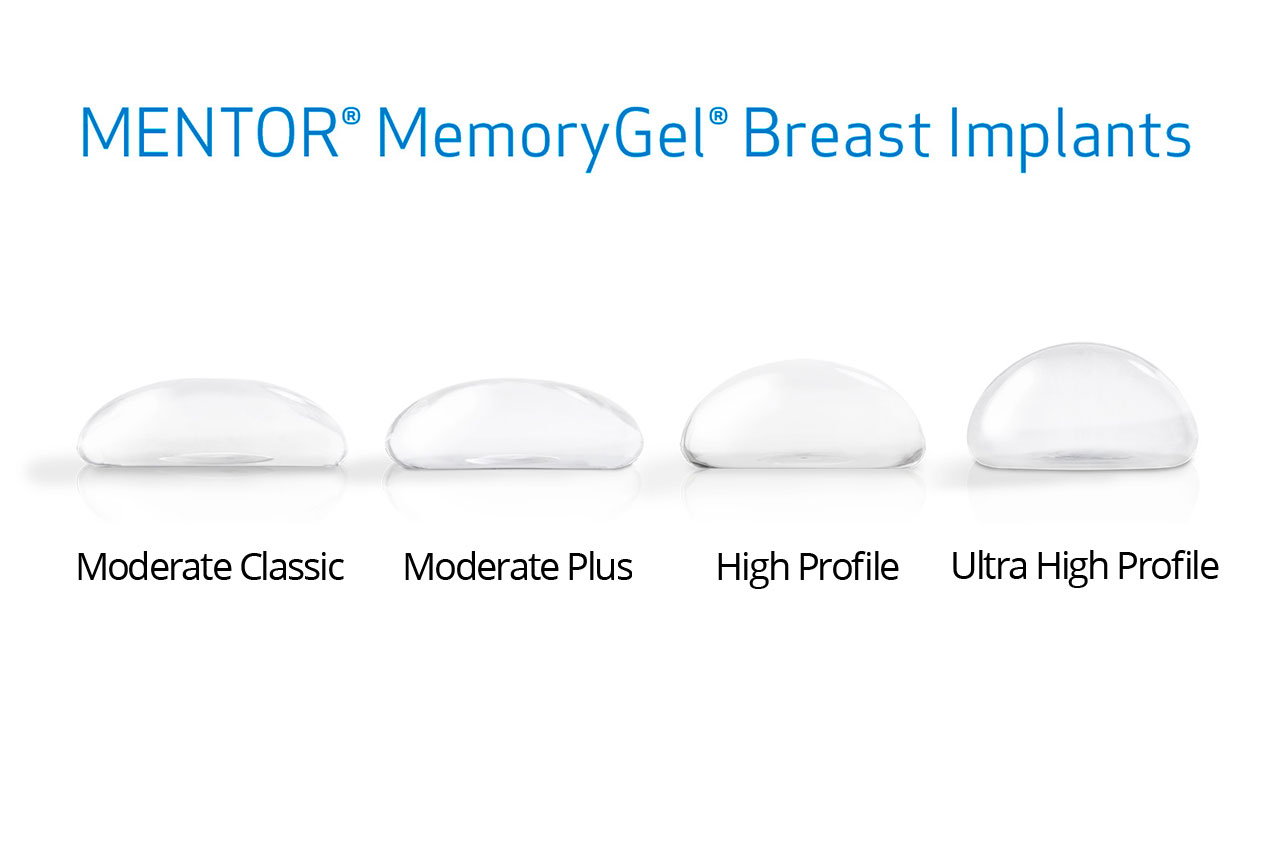 Breast implants are available in as many as five different profiles. Here four MENTOR profiles, Moderate Classic, Moderate Plus, High Profile and Ultra High Profile, are used to show the differences in forward projection each breast implant profile offers.

There are two choices to be made when it comes to placement of a breast implant, subglandular and submuscular, over or under the pectoral muscle, respectively.

When implants are placed above the muscle, capsule contracture rate can be as much as six times higher. To reduce contracture rate in above-muscle placements, some surgeons offer textured breast implants. However, each technique has its advantages and disadvantages:

Some surgeons recommend placing it under the muscle as studies have shown that this technique results in softer and more natural-looking breasts, a lower risk of capsule contracture, and improved long-term results. 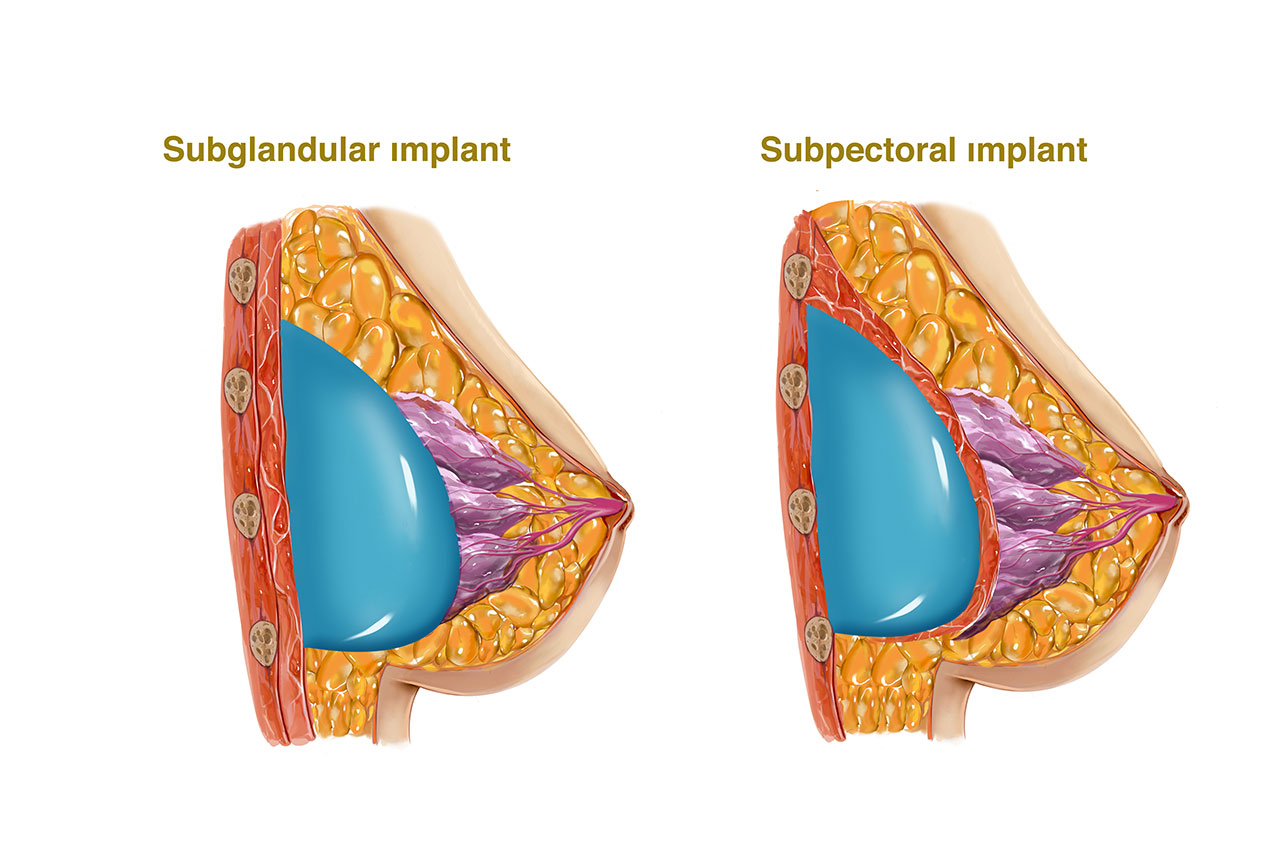 Some surgeons recommend placing it under the muscle as studies have shown that this technique results in softer and more natural-looking breasts, a lower risk of capsule contracture, and improved long-term results. When implants are placed above the muscle, capsule contracture rate can be as much as six times higher.

Most plastic surgeons include Keller Funnel 2 in their cost of supplies. In June 2017, Allergan Sales LLC acquired Keller Medical Inc., maker of the Keller Funnel, for an undisclosed sum.

The real reason why more women are not pursuing breast augmentation is due to cost. RealSelf reports that the average cost of a breast augmentation procedure among its community members is $6,550, but if you live in a glitzy city like Los Angeles you could easily be talking $12,000-plus.

All that talk about ruptures and revision surgery has led to a host of warranties each of the three U.S. manufacturers provides: